My Dog Mounted Me! Why Would They And What Can You Do To Stop It?

“My dog mounted me, is that normal?”I recently received a similar question from a dog lovers. It’s OK, we are here now; everything will be fine!

We love our dogs and of course, they love us too! However, there can be times when they show their love for us a little too much. This means that your dog would mount you the same way they would for other dogs. It can get quite uncomfortable for us, that’s for sure. There is a reason for this behavior. Read further and find out the reasons as to why they would do this, and what you can do about it!

Nope, it has nothing to do with the mountains. Mounting is when your dog decides to ‘love’ you, or in other words, hump himself or herself on you. When your dog does this on you, it gets a little awkward for you, and naturally, your usual options would be to shoo your dog away or just… let it happen. 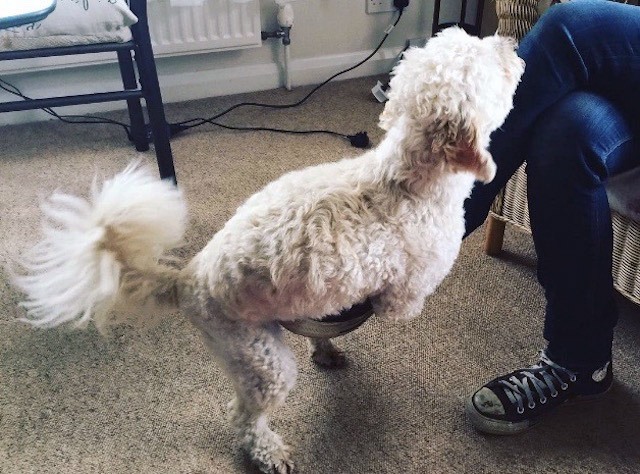 Most of the time, people view this happening as something comical and hilarious, but in reality, it’s really just plain embarrassing. Sure, you would be laughing a little while the moment you see your dog doing it and so would others, but the longer it happens… the more awkward you realize it can be.

Why Do Dogs Mount in the first place?

If you haven’t already guessed it, mounting, or in other words, ‘humping’ is the usual position they will take when they wish to mate. So… why do they do this?

As I have mentioned, they perform this behavior when they need to mate. This mostly happens to dogs who have yet to be neutered or spayed due to the fact that their hormones are still all over the place.

They probably are too excited about something. Mostly a thing or a person that is new in their lives. They would be hopping around, speeding through the house, and circling around that new something until they suddenly start going at it.

When a dog hasn’t been properly shown or taught the proper way a canine is supposed to act, they would act in this sort of way. They do not understand the regular things that a dog is supposed to do in a similar situation. This can be due to the fact that they have not been socialized with other dogs.

Since a dog doesn’t understand what is usually ‘wrong’ or what is ‘right’, they don’t know what’s so inappropriate about their actions. They do it because it’s just as regular as barking and not something viewed as negative in their perspective, and actually something they do with other dogs as if saying hello.

Have you been ignoring your dog? Perhaps you have ignored his other attempts at gaining your attention, and when they realized that they would be able to have your focus on them only when they start mounting they would start doing it more often in order to grab your attention.

Fun aside, your dog could possibly have a medical condition. If you notice that they are continuously licking their genitals in an abnormal manner, that could be a sign of a dog having a canine compulsive disorder. It could mean many things other than that, it may even be an itch that they aren’t able to get rid of.

How do I prevent this behavior?

Of course, if you do not want to suffer from embarrassment you would want to fix this little issue as soon as possible. So, how are you supposed to do it?

This applies to any problems you see in your dog’s behavior. If you want it to stop you’ve got to stop it as soon as possible. The sooner your dog’s negative behavior is fixed (preferably at the puppy stage) the better it will be for the both of you.

If you do this for your dog, this would, of course, lessen the number of times they would go on about mounting other dogs, people, or objects. However, if it is in older dogs who have gotten used to this as a habit, you must go through more thorough measures in order to take care of the problem.

This can be the last measure for any behavior that you don’t like inside of your dogs. Of course, you would have to hire someone or go through efforts to do it yourself, but nonetheless, it is still very efficient.

Once your dog starts doing this to you, all you have to do is to slowly stand up and walk away. This will teach them in a simple manner that what they are doing isn’t something that they should do. Try to tell this to other members of the household or to people who’d visit your home.

Dogs mount and hump a lot of times, and for them, it is something considered normal, however, to human beings it can be viewed as inappropriate and rude. The best course would be to solve this problem as fast as you can if you don’t want any more embarrassing moments to happen between you and other people when your dog’s around.

As small as it is, there are reasons for this action. Reasons that can help you discern how you are supposed to go about in solving this behavior.

If you think there are other dog owners who are suffering the same problem, do not forget to share this in any of your social media.

Why Does My Dog Pee On My Bed? Will You Care To Know?

Puppies Poop A Lot: How To Know It’s Getting Too Bad?

What Can I Give My Dog To Calm Him Down? 7 Tips To Soothe A Hyper Dog

It is Easy to Train Dogs! Do You Want to Know How to Do It?

How Do I Let My Dog Do Me Some Fun Dog Tricks?

Previous Post What Can I Give My Dog for Pain? Best Medications To Ease Dog Next Post The Top 5 Best Food For Yorkie Puppy You All Need!